The UGC NET examination 2016 December was not held; but was held on 22nd January 2017. The UGC NET Examination Question Paper-1 Test Booklet Code W along with the answers are given below.

1. The principal of a school conducts an interview session of teachers and students with a view to explore the possibility of their enhanced participation in school programmes. This endeavour may be related to which type of research ?
(1) Evaluation Research (2) Fundamental Research
(3) Action Research (4) Applied Research

4. Below are given two sets – research methods (Set-I) and data collection tools (Set-II).
Match the two sets and indicate your answer by selecting the correct code :

Read the following passage carefully and answer questions from 7 to 12 :
The last great war, which nearly shook the foundations of the modern world, had little impact on Indian literature beyond aggravating the popular revulsion against violence and adding to the growing disillusionment with the ‘humane pretensions’ of the Western World. This was eloquently voiced in Tagore’s later poems and his last testament, Crisis in Civilisation. The Indian intelligentsia was in a state of moral dilemma. On the one hand, it could not help sympathising with England’s dogged courage in the hour of peril, with the Russians fighting with their backs to the wall against the ruthless Nazi hordes, and with China groaning under the heel of Japanese militarism; on the other hand, their own country was practically under military occupation of their own soil, and an Indian army under Subhas Bose was trying from the opposite camp to liberate their country. No creative impulse could issue from such confusion of loyalties. One would imagine that the achievement of Indian independence in 1947, which came in the wake of the Allies’ victory and was followed by the collapse of colonialism in the neighbouring countries of South-East Asia, would have released an upsurge of creative energy. No doubt it did, but unfortunately it was soon submerged in the great agony of partition, with its inhuman slaughter of the innocents and the uprooting of millions of people from their homeland, followed by the martyrdom of Mahatma Gandhi. These tragedies, along with Pakistan’s invasion of Kashmir and its later atrocities in Bangladesh, did indeed provoke a poignant writing, particularly in the languages of the regions most affected, Bengali, Hindi, Kashmiri, Punjabi, Sindhi and Urdu. But poignant or passionate writing does not by itself make great literature. What reserves of enthusiasm and confidence survived these disasters have been mainly absorbed in the task of national reconstruction and economic development. Great literature has always emerged out of chains of convulsions. Indian literature is richer today in volume, range and variety than it ever was in the past.

Based on the passage answer the following questions from 7 to 12 :
7. What was the impact of the last great war on Indian literature ?
(1) It had no impact.
(2) It aggravated popular revulsion against violence.
(3) It shook the foundations of literature.
(4) It offered eloquent support to the Western World.

8. What did Tagore articulate in his last testament ?
(1) Offered support to Subhas Bose.
(2) Exposed the humane pretensions of the Western World.
(3) Expressed loyalty to England.
(4) Encouraged the liberation of countries.

9. What was the stance of Indian intelligentsia during the period of great war ?
(1) Indifference to Russia’s plight.
(2) They favoured Japanese militarism.
(3) They prompted creativity out of confused loyalties.
(4) They expressed sympathy for England’s dogged courage.

10. Identify the factor responsible for the submergence of creative energy in Indian literature.
(1) Military occupation of one’s own soil.
(2) Resistance to colonial occupation.
(3) Great agony of partition.
(4) Victory of Allies.

11. What was the aftermath that survived tragedies in Kashmir and Bangladesh ?
(1) Suspicion of other countries (2) Continuance of rivalry
(3) Menace of war (4) National reconstruction

12. The passage has the message that
(1) Disasters are inevitable.
(2) Great literature emerges out of chains of convulsions.
(3) Indian literature does not have a marked landscape.
(4) Literature has no relation with war and independence.

15. The typical feature of an information-rich classroom lecture is in the nature of being
(1) Sedentary (2) Staggered
(3) Factual (4) Sectoral

22. Among the following, identify the continuous type of data :
(1) Number of languages a person speaks
(2) Number of children in a household
(3) Population of cities
(4) Weight of students in a class

24. Out of four cities given below three are alike in some manner while the fourth one is different. Identify the odd one
(1) Lucknow
(2) Rishikesh
(3) Allahabad
(4) Patna

26. If two standard form categorical propositions with the same subject and predicate are related in such a manner that if one is undetermined the other must be undetermined, what is their relation ?
(1) Contrary (2) Subcontrary
(3) Contradictory (4) Sub-altern

27. Men and woman may have different reproductive strategies but neither can be considered inferior or superior to the other, any more than a bird’s wings can be considered superior or inferior to a fish’s fins. What type of argument it is ?
(1) Biological (2) Physiological
(3) Analogical (4) Hypothetical

The table below embodies data on the sales revenue (` in lakh) generated by a publishing house during the years 2012-15 while selling books, magazines and journals as three categories of items. Answer questions 31 – 33 based on the data contained in the table. 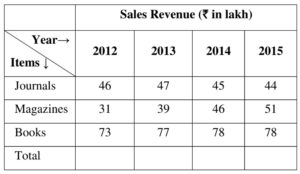 A University professor maintains data on MCA students tabulated by performance and gender of the students. The data is kept on a computer hard disk, but accidently some of it is lost because of a computer virus. Only the following could be recovered :

38. Read the following two statements :
I : Information and Communication Technology (ICT) is considered a subset of Information Technology (IT).
II : The ‘right to use’ a piece of software is termed as copyright.
Which of the above statement(s) is/are CORRECT ?
(1) Both I and II (2) Neither I nor II
(3) II only (4) I only

41. With regard to a word processing software, the process of combining static information in a publication together with variable information in a data source to create one merged publication is called
(1) Electronic mail (2) Data sourcing
(3) Mail merge (4) Spam mail

43. Assertion (A) : Sustainable development is critical to well being of human society.
Reason (R) : Environmentally sound policies do not harm the environment or deplete the natural resources.

48. Which of the following natural hazards is not hydro-meteorological ?
(1) Snow avalanche (2) Sea erosion
(3) Tropical cyclone (4) Tsunami

51. The purpose of value education is best served by focussing on
(1) Cultural practices prevailing in the society.
(2) Norms of conduct laid down by a social group.
(3) Concern for human values.
(4) Religious and moral practices and instructions.

52. Which of the following statements are correct ?
(a) Rajya Sabha is a permanent House which can be dissolved only during national emergency.
(b) Rajya Sabha does not represent the local interests of the States.
(c) Members of the Rajya Sabha are not bound to vote at the dictates of the states they represent.
(d) No Union territory has a representative in the Rajya Sabha.
Select the correct answer from the codes given below :
Codes :
(1) (a) andü (d) (2) (b) and (c)
(3) (b), (c) and (d) (4) (a), (b), (c) and (d)

53. Which of the following are not necessarily the immediate consequences of the proclamation of the President’s Rule in a State ?
(a) Dissolution of the State Assembly.
(b) Removal of the Council of Ministers in the State.
(c) Takeover of the State administration by the Union Government.
(d) Appointment of a new Chief Secretary.
Select the correct answer from the codes given below :
Codes :
(1) (a) andü (d) (2) (a), (b) and (c)
(3) (a), (b), (c) and (d) (4) (b) and (c)

55. Which of the following set of statements represents acceptable propositions in respect of teaching-learning relationships ? Choose the correct code to indicate your answer.
(i) When students fail in a test, it is the teacher who fails.
(ii) Every teaching must aim at ensuring learning.
(iii) There can be teaching without learning taking place.
(iv) There can be no learning without teaching.
(v) A teacher teaches but learns also.
(vi) Real learning implies rote learning.
Codes :
(1) (ii), (iii), (iv) and (v) (2) (i), (ii), (iii) and (v)
(3) (iii), (iv), (v) and (vi) (4) (i), (ii), (v) and (vi)

57. Effectiveness of teaching has to be judged in terms of
(1) Course coverage
(2) Students’ interest
(3) Learning outcomes of students
(4) Use of teaching aids in the classroom

59. One of the most powerful factors affecting teaching effectiveness is related to the
(1) Social system of the country (2) Economic status of the society
(3) Prevailing political system (4) Educational system

Candidates are suggested to check the question: Click here